2010 was the first year Dutch Belted Cows were included in the Dairy Cattle Show at the New York State Fair.  It was also the first time I had been to the State Fair since I was a child in 4-H.  The President of the Dutch Belted Cattle Association, Cornell Upson, wanted to exhibit as many “Dutch Belts” in the show as possible, so we loaded our cows and brought them to the fair in Syracuse.  It was a real adventure, from sleeping overnight in our VW camper van, to learning all the details that go into getting the cows ready to show. 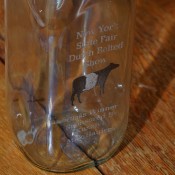 The “cream” of every breed is at the fair, but it’s hot, crowded and noisy there.  I would never go if I wasn’t involved with the cows.  It’s fun to walk through the fair at dawn, though, when there are no crowds and the Ferris wheels are still, and I like being in the dairy barn.  We love learning from the exhibits.  It’s also fun to meet the many people who come to see the cows, and to meet other Dutch Belted cattle farmers – this year there were about 50 Dutch Belted cows at the fair!

The one who enjoys the week at the fair most is our 14 year-old son, Teddy.  He takes on the responsibility of preparing our cows for the show ring, so he meets all the other kids who participate.  We’re amazed by how competent, responsible and fun-loving these farm kids are.  Every morning, they rise at 5:00 a.m. to milk cows, shower them from head to toe, clip their coats, clean their ears, shine their hooves and horns to make them look their absolute best, all while keeping their bedding meticulously clean and answering the multitude of questions fairgoers ask.  They  think of it  as fun, and I never hear a complaint from any of them, including Teddy.

We had such a good time and learned so much by showing our cows, now we’re sold on the whole Fair experience. We love talking to the farmers, from whom we learn about the different definitions of “sustainability.”  A farm with a thousand cows has a totally different definition of sustainability than we do.  The farm community has shown us such kindness, considering we are not experienced farmers. They make no judgments, teach us anything we ask and encourage us to keep it up.  Bill likes the opportunity to network with other farmers.  We’ve made good friends from farms all over New York through our fair experience.